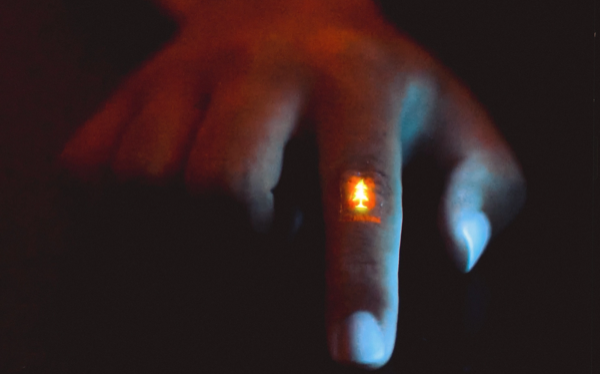 Stanford’s Zhenan Bao and team have developed a stretchable, potentially reshapeable, wearable display that can allow a new way of interactive human-machine interface. “We can see the image and interact with it, and then the display can change according to our response” said Bao in a Stanford interview.

The display is made entirely of stretchy polymers, with a maximum brightness of twice that of a cellphone. It can be stretched to twice its original length without tearing.

Most light-emitting polymers are crack when stretched. Flexibility can be increased with elastic insulating materials, which decrease electrical conductivity, and require a dangerously high voltage.

When electricity runs through the display, one electrode injects positive charges, called holes, into the light-emitting layer, while the other injects negatively charged electrons into it. When the two types of charges meet, they bond and go into an energetically excited state. Almost immediately, the state returns to normal by producing a photon.

The resulting all-polymer film can adhere to an arm or finger and doesn’t rip during bending or flexing. This allows wearable tracker displays to directly attach to skin.

Bao imagines “a display where you can both see and feel the three-dimensional object on the screen. This will be a completely new way to interact with each other remotely.”